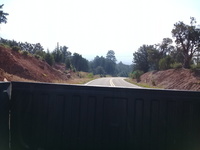 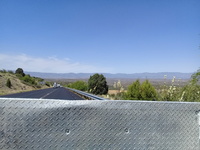 Another pickup truck. This one belonged to a hunter who wanted to help me out. He drove me to Flagstaff and offered to buy me McDonald’s if I was hungry.

Amélie, a woman from Paris, picked me up. She lives in Mexico most of the year working as a scuba divimg instructor. Now she’s on a solo roadtrip around the states. “I feel like the world is my home.” 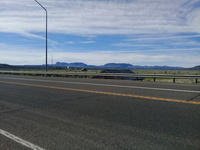 I had the longest wait of the day in this spot. It wasn’t the optimal time to be heading East, most of the traffic was heading to the national park. A Russian hitchhiker named Maxim walked up to me while I was trying to catch a ride. He said the U.S. is the worst place for hitchhiking— very contrary to my experience. He then said that the fastest way to hitchhike is as a man/woman couple. I disagreed… having experienced both solo, pairs, trios, etc. by far hitchhiking as a solo woman is the fastest, followed by a pair of women, followed by a woman and a man together. It was weird he was denying this experience, since he has obviously never hitchhiked as a woman. Anyway, he decided to continue down the highway. A bit later a man stopped and offered to drive me to Boulder- he is working a construction job there. I let him know about Maxim down the road, but he wasn’t interested in stopping for a second hitchhiker. The ride was fine- quiet- until around Escalante, when the driver pulled out some beers and wanted to start drinking. I decided to get out of the car. At that point it was close to sunset. 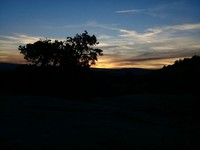 A few cars passed me until a father/daughter duo stopped. Nice people, they weren’t going far, but they new of a sweet dispersed camping spot near the highway up ahead. They dropped me off there as the sun was setting.