A woman on a road trip from California picked us up. She worked as a doctor and had just competed in an Ultimate Frisbee competition

A mother and her daughter were going camping. The mother told her daughter “See? Look at the interesting and nice people you can pick up who are hitchhiking?” 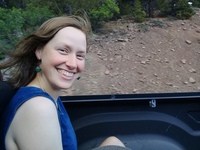 A middle-aged couple from Oklahoma picked us up. We hopped in the back of their pick-up (Emily’s first time riding in the back of a truck!). They were super friendly- offered us sandwiches and checked in to make sure we were doing all right during the ride.

Ride to a better spot

A man named David Holiday and his 10 year old son picked us up. He told us he had just hitchhiked from central Mexico a few months before and thought we were brave. 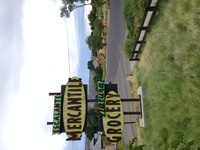 Amber, the owner of a local cafe, and her daughter picked us up. A really cool woman!